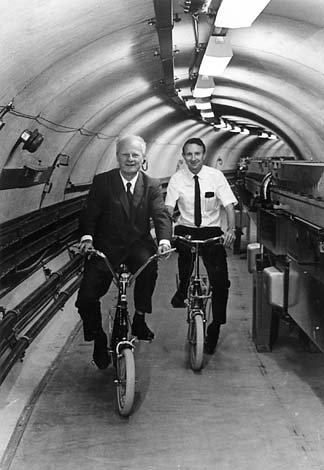 Hans A. Bethe was a world-renowned scientist, a distinguished professor of physics and one of the most honored faculty members in Cornell's 140-year history.  A pioneer of 20th century physics and astronomy, he received the Nobel Prize in Physics "for his contributions to the theory of nuclear reactions, especially his discoveries concerning the energy production in stars."  A leading member of the Manhattan Project that developed the first atomic bomb, Bethe later became a tireless champion of nuclear arms control.  His intellectual leadership was profound and his scholarship enduring.  In every decade from the 1920s until the 2000s, he published seminal papers in physics.

Professor Bethe was a man of profound integrity and humility who made outstanding contributions beyond his own discipline in a constant effort to influence public policy for the greater good.  He was instrumental in changing the public perception of the role of science and scientists in relation to society.  He was famous for his optimistic phrase: "I can do that" when faced with adversity or a critical unsolved problem.  His unwavering loyalty to Cornell and its students, his integrity and humility, as well as his profound intellectual accomplishments made him one of the most revered members of the Cornell faculty.